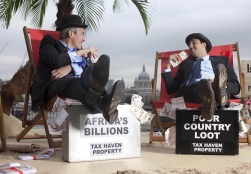 You are invited to this screening of The UK Gold, hosted by Stourbridge Churches Together.

There will be an exhibition and the film will be followed by an open panel discussion.

Christian Aid has partnered with Oxfam and Action Aid to sponsor the film, The UK Gold: a story ‘seismic enough to shift perceptions of finance and flag forever.’

The UK Gold follows Hackney vicar Father William Taylor as he stands up and speaks out against tax dodging.

Narrated by Dominic West and featuring a stunning soundtrack by Thom Yorke and Robert Del Naja, it reveals how the UK’s tax havens are complicit in maintaining the financial secrecy that fuels tax dodging, robbing poor countries of an estimated US$160 billion a year.

Father Taylor told Christian Aid: ‘I can see the City of London from my parish in Hackney and I’ve often wondered what goes on over there.

‘This film is about joining the dots and showing the connection between those with power and wealth and those without.

‘There are countries in Africa struggling because the City is helping companies that operate there to channel funds through havens and avoid paying the taxes they owe.’

One thought on “FILM: The UK Gold – Tuesday 7th October”